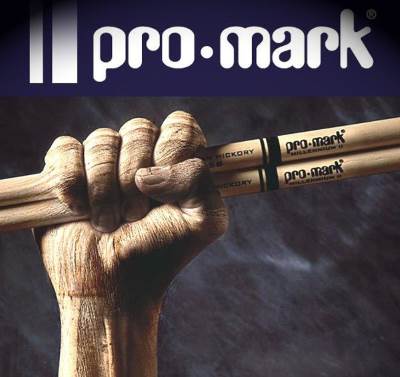 Today, Pro-Mark is the world's largest manufacturer and distributor of drumsticks, mallets and percussion accessories.

Pro Mark began with the importation of several models of Japanese white oak sticks, and for a long time consisted of one person.

It was 1957 and King Elvis Presley ruled the music world. Rock and roll conquered literally everyone. New rhythms required new musical instruments and a new approach to music performance.

Percussion shop owner Herb Brochstein, a professional drummer and teacher, came to the conclusion that the drumsticks available at that time to him, his students, and his clients were no good. Herb began to look for new options.

One day, a street vendor came into Brochstein's shop and offered six pairs of drumsticks. Herb bought the sticks and when he tried them out in concert that same night, he immediately knew he had found something special.

The drumsticks were made from Japanese white oak "shira kashi". They had a special sound and were completely different from those that he had tried before. There were simply no such sticks in America and Europe at that time. It took Brochstein a whole year to find a factory in Japan that made these drumsticks. After that, he found a sales agent who helped him arrange regular shipments of chopsticks from Japan to the United States. Cooperation with this agent, Tat Kosaka, began with a handshake back in 1957 and continues to this day.

Word of the "magic" wands quickly spread throughout the country, and soon Herb began to receive orders from famous drummers, distributors and musical instrument stores throughout the United States. After some time, in addition to importing, the company started producing its own sticks from American walnut and maple. The range of products has expanded. Hickory and maple sticks appeared, as well as original Japanese white oak sticks. Over the years, the products offered by Pro-Mark have become the benchmark for quality and reliability in the stick and accessory market.

Today, Pro-Mark is the world's largest manufacturer and distributor of drumsticks, mallets and percussion accessories. Pro-Mark sticks can be found in thousands of music stores in over a hundred countries around the world. The product line has expanded significantly during the existence of the company. The company now offers keyboard stands, drum stands, Hot Rods, practice pads, cases, and more. Many famous musicians and teachers use the company's products.

In 1996, Herb Brochstein passed the business on to his son, Maury, and continues to play at parties, putting his Pro-Mark sticks to the test.

“It has been almost 50 years since my father, Herb Brochstein, founded Pro-Mark. During this time, a lot has changed. One thing remains the same - my desire to provide you with the best tools and help you do your job.