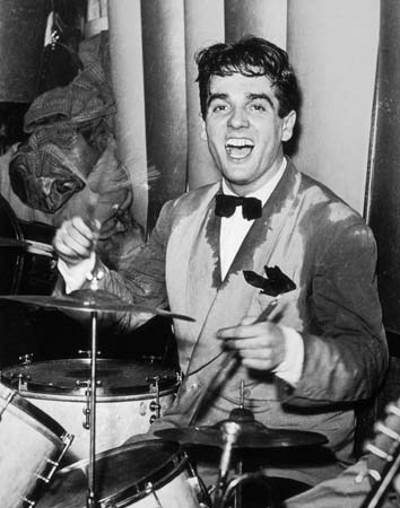 Gene Krupa was born in Chicago on January 15, 1909, the last of nine children of Bartley and Ann Krupa. His father died when Gene was very young and his mother worked as a milliner to support the family. The children had to start working from an early age. Gene Krupa got his first job at the age of eleven. His brother Pete worked for the Brown Music Company and Gene went to work there as a laborer. He started playing the saxophone in elementary school but switched to drums at age 11 as it was the cheapest instrument in the music store where he and his brother worked. “I often looked at the catalog of musical instruments - pianos, trombones, cornets. Drums were the cheapest.”

His parents were very religious. Gene attended various parochial schools, and entered St. Joseph's College, where he studied for a year. His desire to play drums was too strong and he abandoned the idea of ​​becoming a priest. In 1921, while in high school, Gene Krupa began playing in his first band, the Frivolians. He got the drum job by a lucky chance because the band's drummer was sick. In 1923, Gen played with the Austin High Gang, and in 1925 he studied percussion with Roy Napp, Al Silverman, and Ed Straight. Gene played regularly with jazz musicians like Mezz Mezzrow, Tommy Dorsey, Bix Beiderbecke and Benny Goodman. The biggest influence on his playing during this period was Baby Dodds, whom he first heard on the radio. Krupa moved beyond being just a rhythm player and took drumming to the next level. He interacted with other musicians and played long drum solos. His goal was to support other musicians by creating his own role in the band. Gene is also considered the father of the modern drum kit, as he convinced Slingerland Drums to make customizable toms. A new drum project was developed in 1936 called the Seperate Tension Tunable Tom-Toms. Krupa was a Slingerland endorser from 1936 until his death. Krupa was approached by Avedis Zildjian to help the company develop modern hi-hat cymbals. The original hi-hat was called the low-boy. The cymbals were set at floor level, making it almost impossible to play on them with sticks. Krupa's first recording immediately became historic. This happened in December 1927. He became the first drummer to record with a bass drum.

Gene moved to New York in 1929 and was hired by the Red Nichols. He played in George Gershwin's band in his production of Strike Up the Band with Benny Goodman and Glenn Miller. Gene never learned to read music and was often out of tune in rehearsals. Glenn Miller helped him by singing the drums until Krupa learned them. The production continued until 1930.

After that, Benny Goodman convinced Gene to join his band with the promise that it would be a real jazz band. On January 16, 1938, this group became the first jazz band to play at Carnegie Hall. Gene's classic work, Sing Sing Sing, has been billed as the first full drum solo in jazz. After the performance at Carnegie, there was tension between Gene and Benny. The audience demanded that Krupa play more, but Benny did not want to lose his leading position in the group.

Gene left on March 3, 1938 and formed his own orchestra less than 2 months later. His group was an instant success. During this time, Krupa wrote the book The Gene Krupa Drum Method (1938) and founded the Drum Contest. The competition attracted thousands of participants every year. The first winner was Louis Bellson. Gene has acted in several films, including Only Girls in Jazz.

In the summer of 1943, Krupa was arrested in San Francisco and charged with marijuana possession. He was sentenced to 90 days of hard labor. All charges were later dropped. After Gene was released from prison, he briefly reunited with Benny Goodman and Tommy Dorsey. Krupa's bands were often criticized for being too commercial, but he was one of the first to play bebop. Nevertheless, Gene managed to work in his style until December 1950, when most of the big bands had already collapsed.

After the end of the big band era, Gene founded the Gene Krupa Trio. He participated in Drum Battles with drummer Buddy Rich in October 1952 and recorded an LP called Krupa and Rich in 1955. Together with Cozy Cole, Gene founded the Krupa-Cole Drum School in March 1954. In 1959, actor Sal Mineo played Gene in The Gene Krupa Story.

By the end of the fifties, Krupa began to perform and record less due to health problems. He had a heart attack in 1960 which forced him not to play drums for many months. After his recovery, he performed for several years with his own quartet and the Benny Goodman Band. He was knocked down again in the late sixties, and his second marriage fell apart. He stopped playing in 1967, declaring that he felt too lousy to play. During the break, Krupa trained and coached his own baseball team. He last recorded in the studio in November 1972 with Eddie Condon and Bill Davison. He performed on stage for the last time on August 18, 1973.

Gene died October 16, 1973 from a heart attack. He also suffered from leukemia and emphysema.