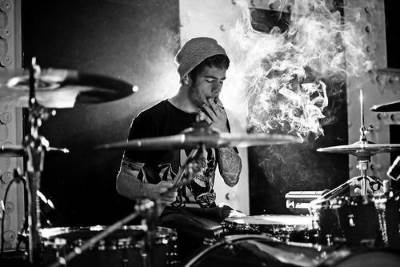 Mistake #1 Perceiving music in terms of an instrument only.

We all prefer music that represents our instrument in all its glory. The drummer's problem is the short-sighted approach of seeing the party from the inside. This means that the drummer first of all thinks about how he will play, and not about how the drum line conveys the music.
In the first place is the music itself, and a great drum part is one of its essential components. Listen to good music, not just good drummers.

Unlike others, the drummer does not learn scales, solfeggio. We are working on technology. But the minus of this approach does not allow you to learn how to build a part in an orchestral manner. Since it is not necessary to memorize all the chord changes, drummers think in time with the beat, when it is better to think in phrases dictated by the arrangement. It allows you to kind of tell the story through the song.
That's why many people admire Ringo [Ringo Star's] playing, while others throw up their hands in bewilderment, not understanding why he is so good. With such limited technique and simple ideas, how can one be called a great drummer? they ask. The reason is Ringo's extraordinary ability to play the right accompaniment to a song. Part A works well with part B, which brings the listener to the final part C. This is a very subtle nuance, but very powerful.

The necessary basis for the concept of groove is the right speed. It's more than just playing clearly in time. We need a tempo that allows other musicians to feel comfortable.

Most drummers tend to play at their own pace. That's why you need to experiment with songwriting as well.

Try recording several different parts, each at a different speed. Over time, clarity will come which of them fits into the canvas, and which does not. Such a revelation does not come during the course of the game itself. But this is most obvious when playing the instrument under which the song is written, as the composer feels the right tempo when composing.

Mistake #4 Layering the beat too much to add intensity.

Tony Williams [Tony Williams] was a master of such cases. But none of us are Tony Williams. Playing drawings that are too far from the main beat does not give anything but immersion in the chaos of the musical theme and excessive haste. You might think you're kicking some real heat, while your bandmates are thinking about sounding wild.

Mistake #5 Deliberately slowing down the beat to deepen the groove.

In most situations, this does not help. There are circumstances where this is acceptable, especially in places where musicians have a good sense of time. But by dragging too hard, you run the risk of burying the band's momentum, and a groove that's too deep can become a grave. When I toured as a bassist, I pulled a drummer that was way behind on me many times.

There is nothing I love more than coming up with polyrhythmic patterns in conjunction with a capable drummer. However, this is not always good.

There was a time when I played in a band whose drummer handled polyrhythms, odd time signatures, and intricate patterns with amazing ease. But when our common flight of fantasy dried up, it was impossible to achieve a clear rhythm from it. When asked to play along with me with a barrel with an emphasis on a strong beat in a cymbal, he refused, arguing that it was too obvious, and he avoids clichés. Well, I have to say, sometimes, clichés are the way to go. It works, which is why it has become a cliché.

This error is related to the previous ones, but concerns more general aspects of execution. The band's musicians rely on the drummer for more than just rhythm. You need to be able to emphasize the timbre changes of one part from another, increased dynamics, strong endings, and the role of connecting bridges should be felt in the fills. At first glance, this seems simple, but you will be pleasantly surprised every time you learn to notice such nuances.

Mistake No. 8 Too heaped party.

What an obvious thing. So why do so many drummers keep doing this? This is probably due to years of practice on elastic bands, and insufficient attention to the musical component.

At one time, fate brought me into contact with a quite competent drummer. But he often slipped a tendency to inappropriate insertions. It could be a crash cymbal in the middle of a phrase, a jazzy syncopation in a ballad, or a double bass drum accompaniment to a vocal.

All drummers are aware of the need to improve their technical skills. But many of the great musicians do not have a perfect technique. They are good at their ideas. You can be a good technical drummer, but good ideas require wisdom and talent. And it doesn't come through your feet and hands, it comes straight from your head and heart.