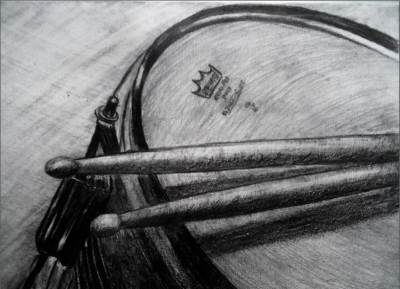 In most cases, the harder the wood, the better it sounds. The denser and harder the material, the more evenly the vibrations are distributed. When the vibrations are evenly distributed, the sound will be more even when struck or transmitted from the head. There is a huge variety of hard exotic woods, many of which are harder than those commonly used. But in order to be economically viable for mass production, wood must be inexpensive, easy to work with and look good. The cost of a tree depends directly on its reserves in the world. Ease of processing depends on how long, straight, dense the fibers that make up the wood, as well as the number of knots. The wood should be sufficiently dense and hard, but not so hard that it cannot be shaped into a circle by bending. Appearance depends on similar characteristics as well as the pore structure, which should be visually pleasing and colorable.

Here are some of the wood species that meet the necessary requirements: maple (maple), birch (birch), poplar (poplar), ash (ash), mahogany (mahogany or lauan). There are different types of these breeds that grow in different parts of the world. Each of them has different characteristics, but similar enough to each other to belong to the same category. In this case, we will not consider the difference between Canadian stone maple or any other type of maple, or between Scandinavian birch and any other birch.

Maple, birch and mahogany.
Most drums are made from one of these types of wood, so we will compare them with each other. Mahogany is the softest of the three, it also comes in last place in appearance, so it is the most inexpensive. That is why mahogany is often used to create budget series of drums. Because of their relatively unsightly appearance, most mahogany drums are covered with plastic. This is also beneficial to the cost of production, as the plastic shell is much less labor intensive than a spray finish.
Maple and birch are the woods from which most of the most expensive drums are made. The choice between these two types of wood depends on personal preference. Both maple and birch have great tonal properties and look great with clear lacquer. There is, however, one subtlety: one of the reasons why maple is so popular with American drum makers is that maple is Robert Keller's choice. Without naming any names, we should point out that a very, very large number of drum makers in America buy drum shells from the Keller Company. There is nothing reprehensible in this. Keller makes great cases and has over half a century of experience, so they know what they're doing.
But, in addition, maple, birch and mahogany have different timbre characteristics. Consider them.
The charts below are provided by Jin Okamoto and the staff at Pearl Drums. Be aware that the material used by most companies for the mahogany shells we call Laua is not the same as the African mahogany that is listed on the Pearl charts, but much cheaper, less attractive and worse sounding varieties. this wood.

Particularly strong low frequencies, with smooth mids and slight truncation in the high frequencies for situations where "huge" lows are needed.

Many describe the sound of maple drums as "warm" and flat in frequency response. Birch is often characterized as "bright" because it produces more high frequencies than maple. The point is that many musicians attach great importance to their instrument and equipment. Because of this, they hear minimal differences that most ordinary people cannot perceive. Each of these woods, with the exception of Laua, from which cheap series of drums are made, has equally remarkable sound characteristics. If you have any preferences regarding the frequency response of the drums, please take these differences into account.

Body thickness.
In a nutshell, the thicker the shell, the higher the sound will be. Accordingly, the thinner - the lower the sound of the drums. Don't worry too much about the number of layers. It is not always possible to judge the thickness of the hull by the number of layers. Different companies use layers of different thicknesses. The thickness of the wood layer is also affected by the density of the tree. Laua layers are much thicker than, say, birch layers, since birch is much denser and can be cut more thinly. One company's 9-ply shell may be thinner than another's 6-ply shell. There are many options.
The use of multi-layer shells, instead of single-layer shells, gives strength to the drum body. By alternating layers of different structures, it is possible to ensure that a thinner shell is stronger than a thicker one. It will also be less prone to warping, due to the fact that the directions of the fibers of each layer will be different.
Jin Okamoto of Pearl Drums provided the following information on how body thickness affects the sound of a drum: the number of layers affects the transfer of energy from the head to the shell. This factor has a significant impact on the tonal characteristics and projection of the sound of the drum.

A thin shell (4 layers, 5mm) relatively easily transfers the impact energy from the head to the shell, thus causing the drum to vibrate. This vibration gives a very strong, rich "woody" timbre to the overall sound, which is especially appreciated when recording.

Shells of medium thickness (6 layers, 7.5 mm.) have greater hardness and prevent the transfer of energy from the heads. With less shell vibration, a compromise is reached: the sound is "cooler" than thinner shells, but more sound projection is achieved. Drums of this thickness are ideal all-rounders and are suitable for situations where more "horsepower" is needed.

The thick shells (8 ply, 10mm and 10 ply, 12.5mm) are the most "producing" and allow all the energy of the performer to be focused on the listeners. These drums are ideal for "stadium" type concerts and other situations that require a high level of sound pressure. Snare drums with shells of this thickness can compete with metal ones in intensity and sound projection.

Hull depth.
It is well known that the larger the diameter of the drum, the deeper it sounds. Depth also affects timbre. The deeper the shell, the lower the sound and vice versa. But the depth of the shell affects not only the timbre. A deep shell drum will sound louder and have better projection. The narrow body of the drum does not have a good projection, but it resonates better and has a better timbre. That is why the so-called. "power toms" were so popular in 70s rock music - projection and bass. That's why smaller drums are so often used by jazz players - cleaner, more fundamental tones.