How to get an invitation to a concert 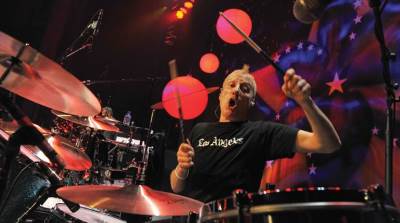 BE A GOOD PERSON
It may seem like this tip has nothing to do with drums, but it does. If you want to be a drummer in a band, or if you want to make a living playing drums, then you have to be a good person. Sociable person. Basically, you should try to become the person you would like to spend time with. There are so many great musicians playing gigs, but they are terrible people. They constantly complain, they are always in a bad mood, no matter what happens, they always see only the negative. People will only tolerate you up to a certain point. You can't be like that. Be a beacon of light in the room.

INSPIRE PEOPLE
If you think positively and inspire people, they will want you to be in their group. They'll want to jam with you or they'll want you to play on their albums. I mean, well, think for yourself, if someone wants you to play on their records, you should be very grateful to them for this. I am not saying that you should be a court jester. But you have to be a good, positive person. Inspire everyone around. Treat people the way you would like people to treat you.

BE STYLISTICALLY CORRECT.
It's something that people don't usually think about very much. If you are going to play with a metal band then learn the songs and play like a metal drummer. If you're going to play with a bebop band, add some brushes. Listen to the song, catch the wave and play in this style. The drummer must not play inappropriately. Do not invent what is not needed. You have to fit in perfectly, everything around you has to sound great. You can master twenty different styles and it's your job to play it right and believable. You have to do everything to sound authentic with the music played by the whole band.

WORK FOR A SONG
People talk about 'gospel chops' as a style. But consider: gospel is church music, and what is the most important part of that music? Of course, words. A lot of drummers just explode and do all these crazy things and play across the lines. There is a prejudice that if you are not swinging your arms and legs like a madman behind the installation, then you are not working off your earnings. This is absurd. If you're playing with Miles Davis or Joe Satriani or anyone, you have to remember that these guys play melodies. Or you play along with the performer. The vocals are the main thing. And that's it. If you're only playing drums to put in fast, cool chips, then you're not working for the song, in fact, you're only hurting both the song and yourself.

SETUP
Another thing that people sometimes forget about. Before performing or recording, you should make sure that your drums are tuned to match the style of music you intend to play. Some guys come to concerts with dented, broken plastics. These heads have no sustain, you hit them and they make this 'doonk' sound. No one can do anything to your sound if you're playing dead heads. Sound engineers in live shows or studios won't want to work with this. Give them a sound, give them a tone - something musical.
Translation: Oleg Kuznetsov
Editor: Anna Gornaya