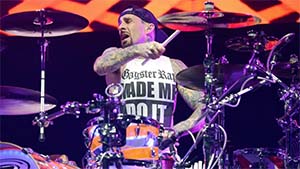 Travis Barker has been hospitalised in Los Angeles, according to a report from TMZ. The Blink-182 drummer is thought to have checked in to the West Hills hospital on Tuesday, accompanied by his wife Kourtney Kardashian, before being transferred by ambulance to Cedars-Sinai Medical Center.

As yet, the reason for his admission to hospital has not been given, but pictures posted to TMZ show Travis Barker on a stretcher with his right hand raised, while Kourtney Kardashian follows behind.

TMZ points to the fact that Barker himself tweeted "God save me" hours before the story was reported, however Barker’s Twitter account has since also retweeted a Billboard interview with Jxdn (Jaden Hossler) - who is signed to Barker’s record label, DTA - detailing the writing of two songs dedicated to the loss of Jxdn’s late friend, Cooper Noriega.