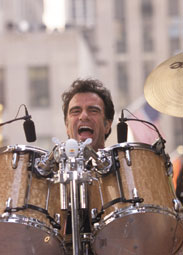 Bon Jovi is one of those bands that goes out and then comes back with even more success - every time they sell a few million more records than before. Crush's latest album is bringing Bon Jovi back on track after a few years of slump. Soon the group goes on a summer stadium tour. MD correspondent managed to talk with permanent Bon Jovi drummer Tico Torres (Tico Torres).

Torres changed his drumsticks for artist's brushes during the downtime. "I've been doing art for as long as I've been making music," Tiko explains. "It's very natural. It's very similar to playing drums. In both cases you work with paint. It's great to step away from drumming. I came back absolutely 'fresh'. I could create again. It's an amazing feeling."< /p>

Bon Jovi's latest album, Crush, was recorded at The Sanctuary in New Jersey. "Obie O'Brien built it in a large warehouse," says Tico. "The sound of the drums was better than anything I had heard before. The drums sounded immediately, even before they were sounded. For me, this is always a big problem. Especially in the song Two Story Town, the studio itself sounds, as they say.

We recorded all the drum tracks live in a big open room. A 16-track analog recording was used, which was then converted to digital for overdubs. I played the new Pearl Masters Series drums with Remo heads. I also used some snare drums - Black Beauty (Ludwig), old Radio King (Slingerland) and Pearl's Brass Floater. All plates were Paiste. On some songs I used a 12' hi-hat and on some I used a 14'. On some songs I used a 20' ride with one shared mic on top. I also used an extra drum that was in front of the open (no front head) main drum to create a subwoofer effect."

Tico, who has been playing with Bon Jovi for seventeen years, is known for his powerful, song-oriented rhythms. He never plays too much, unmistakably choosing the right texture. "I only hit the drum when I really want you to hear it," Tiko insists. "I don't pick sounds randomly. If there's a nuance, I want you to hear it. That's what I admire about Ringo's playing - the way he played with the ensemble. He always worked on a song. On The Next 100 Years drum fill before the chorus is played exactly in the style of Ringo".

With enough freedom not to look at the clock, the band was able to record multiple takes of individual songs. "Say It Isn't So was originally a 16-note stream," Tiko says. "The hi-hat was playing the chica-chica rhythm. But at the last moment, I started playing heavy fourths on the hi-hat, which made the rhythm fatter. It changed the whole character of the song. In the second part, I deliberately put a towel on top of the ride cymbal and played on it with a tambourine stick. But it gave the song the wrong character, and I removed the towel and switched to a cymbal cup. It completely changed the sonic palette of the song."

Being a perfectionist, Tico recorded all drum parts with a click track or over a loop recorded by him. "That way it's easier to evaluate your game," says Torres. "It was great to just record something with a hi-hat and tambourine and then play it over. I look at loops as something to play with. On Mystery Girl, I used to play brushes over the loop, but then we took the loop out and left only brushes".

Crush was two years in the making and was produced by Luke Ebbin along with Jon Bon Jovi and Richie Sambora. During the 6 months of recording, the band recorded over sixty songs. "Luke was our young ears. He was great to work with. He had good ideas and he's good with computers. And we work well with someone who gives us the ability to do what we want, eh, then, something adds to it."
Based on materials from Modern Drummer magazine.
Translation - Yevgeny Ryaboy.