Fifteen years ago, Mike visited our country for the first time as part of the popular German band RAGE, and this visit was a real discovery for him - Mike unexpectedly discovered that he fell in love with Russia, with our passionate and sympathetic listeners. Since then, Mike Terrana managed to visit our country several more times as part of RAGE and TARJA TURUNEN (ex-NIGHTWISH), and performed three times in Moscow with drum shows on his own. Mike Terrana's solo performances were sold out and made a vivid impression on everyone who managed to visit his unforgettable shows.

Being an American by birth, he feels good in Europe, where he now lives, working and touring with Tarja Turunen, as well as with a number of other musical groups performing music of various genres and directions. On February 13, Mike Terrana will please St. Petersburg residents and guests of the cultural capital with his solo performance at the Yashchik club. Everyone will be able not only to enjoy the skill of a virtuoso drummer, but also to ask him any question of interest. Mike will tell drummers about his technique, beginners about how to achieve the same level of skill, and everyone else about why he is the sexiest drummer in the world. It will also be possible to purchase Mike Terrana's well-known video schools in the circle of specialists. 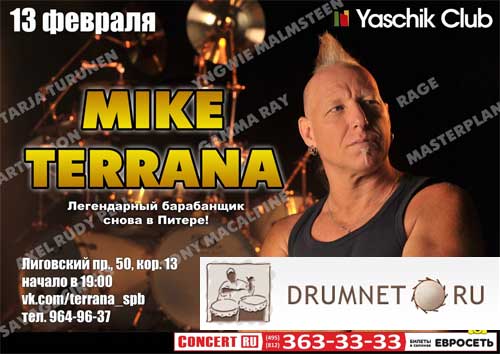