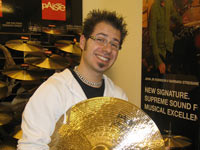 Alexander "Bali" Balajev visited the Paiste factory in Nottwil "Bali" to listen to the new cymbals. He is currently updating his set for a live concert, which will be released on DVD in May 2008.

Alexander "Bali" Balajev is the drummer of "PLUESCH", they have been playing together since 2001 and have already released 3 albums:
"Pluesch" in 2002, "Sidefiin" in 2004 and "Frusch gwasche" in 2006.
Before joining the group, he won many drum competitions.

In recent years, his set of cymbals has been based on the new 20 series, now he sees his dream set consisting of brand new Paiste cymbals: Thin Crash and Light Ride. 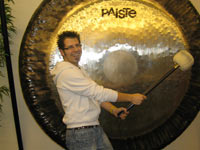