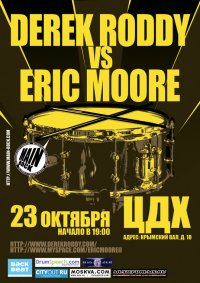 In St. Petersburg on October 22, at the Center for Contemporary Art named after S. Kuryokhin I,
On October 23, an incredible meeting of two drummers will take place in the hall of the Central House of Artists Derek Roddy and Eric Moore.
These professionals have something to show, and they have a lot to learn. They are united by virtuosity and technicality, the desire for progress, self-improvement and the constant search for something new. going out for the framework of the usual, they know no boundaries in their business and never stop there. Like any person who has achieved recognition, they tell us to be omnivores, to learn as much as possible styles, hone your skills as much as possible. BUT the main thing is to play the drums, because of the love for them and for no other reasons. After all, both participants love their work and devoted a lot to it. years.
Attention! Any interested drummer can win a performance on on the same stage with Derek Roddy and Eric Moore, posting a video of his game on the page http://vkontakte.ru/club11443269. Single winner will be chosen by preliminary vote, taking into account the opinion organizers.

The event will consist of four parts. The winner will open it competition, the second will be Eric Moore, the third will be Derek Roddy .
And finally, in the final part of the event, we are waiting for a joint performance of both drummers! The meeting promises to be grandiose!

Widely known in the world of Death Metal as a phenomenal drummer, playing in bands like Hate Eternal, Malevolent Creation, Nile, Divine Empire, Aurora Borealis and Council of the Fallen, he also fluent in the styles of Jazz, Blues, Rock, drum and bass and many others.
With such baggage of various styles, Derek, using all sorts of nuances and bringing something new to his game, became the owner of his own handwriting, its unique game in which the possibilities of mixing different techniques and styles are demonstrated. His abilities and honed craftsmanship are appreciated.
Derek Roddy is a Sonor endorser (plays SQ2 series, previously Delite), and See also Remo. For a long time, used Paiste cymbals and was an endorser Sabian since May 2005. Currently, is the endorser of the largest cymbal manufacturer in Europe - Meinl.
In his set, Derek uses cymbals from different series Meinl - Byzance, Mb20, Soundcaster Custom and Generation X.
He is also the author of the textbook/cd "The Evolution of Blast Beats".


27-year-old drummer from California, in his years made many talk about yourself. His inimitable style of play speaks for itself. As a child, he listened to a lot of church music, then moved to hip-hop, R&B, jazz, etc. In all styles, he found many various chips. One famous drummer said: <