The famous Britons will perform in Moscow and St. Petersburg in March (March 21-24) 2013 with new numbers. The one and a half hour show from STOMP is famous for the fact that with its energy it makes even the most gloomy skeptics rejoice, whose feet already by the middle of the performance begin to stamp, fingers drum, and adrenaline splashes out with powerful jolts. 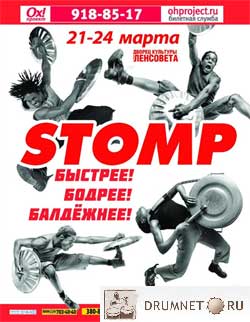 This project has been touring the world for over 20 years, and during this time it has been visited by about 20 million viewers from all over the world. With non-stop energy and a rampage of footsteps, STOMP takes every possible element of everyday life, including trash cans, old newspapers, matchboxes and kitchen sinks, and transforms it into a pulsing, witty, utterly irresistible theatrical event. Over the years of existence, STOMP has had a lot of imitators all over the world, but none of them even came close to the level of the original. STOMP is a true international stage phenomenon not to be missed. STOMP is the best workout for your feet!