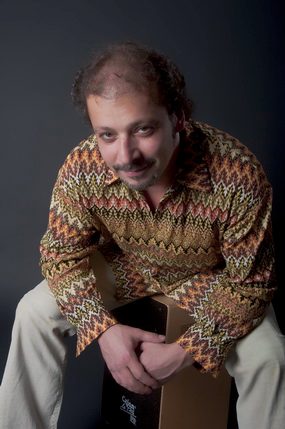 On July 16, the protagonist of the Monday Drummer project will be Artur Gazarov, one of the most famous drummers in the country.

Artur was born and raised in handsome Baku, having absorbed the musical traditions of the peoples of Transcaucasia since childhood. Passion for drums came in the school years, not without the influence of his older brother, bass player, who brought records from foreign performers from tours. The indelible impression on Artur, according to him, was made by the recordings of the legendary band Irakere, the albums of Chick Corea, Bob James and Dave Gruzin, as well as the work of the little-known Czechoslovak band Fermata. Of great interest was the special drive inherent in Latin American music in general and its rhythm section in particular.

After graduating from school, Artur entered the Azerbaijan Institute of Oil and Chemistry, after the second year he was drafted into the army. After the army he moved to St. Petersburg, where he spent some time earning a living as a street musician. And after some time he met one of the first domestic percussionists - Yakov Solodky. He showed Arthur the congas, which were previously known to him only from audio recordings. At the same time, the search for like-minded people who shared an interest in Latin American rhythms continued. Those were found in the person of Kirill Ipatov, Alexei Miksher and Danil Prokopiev. Together they went to St. Petersburg parks and played traditional Afro-Cuban rhythms on the bata drums.

In 1996 Artur came to Moscow for studio recording as a session musician. A combination of circumstances led him to the place of a percussionist in the team of Leonid Agutin, for which Arthur decided to stay in the capital. After three years of work in the team on percussion, he moved to the drum kit.

On the first tour with Agutin in the USA, Arthur was waiting for another discovery. In one of the music stores, he saw (and, of course, heard) Brazilian instruments - surdo, repinik and pandeiro. The ones that play a real carnival samba. This "meeting" led to further deepening into the subject of Brazilian percussion.

While working on a joint project between Leonid Agutin and the legendary Al Di Meola, Arthur met percussionist Gumby Ortiz. So he had the opportunity to consult with a world-class professional. Thanks to this, Arthur established himself in the opinion that in the performance of any rhythm, in addition to technique, the drive and the feeling with which the musician plays are of paramount importance.

In parallel with the main work, Arthur continued to search for like-minded musicians, which led to the formation of the Sambateria team, its first line-up. At first, Arthur simply gathered fellow musicians for a kind of percussion consultation, shared his thoughts on the performance and put on all kinds of percussion numbers. Little by little, this developed into a percussion school, where people began to come who did not have a musical education, but were keenly interested in percussion. From them, the second composition of the Sambateria group was formed, consisting entirely of Arthur's students and operating to this day.

Artur currently lives in Moscow, participates in various projects as a session musician, manages his own band and the Sambateria percussion school, where he teaches and equally studies himself.

We are waiting for you at Artur's master class on July 16.
Entrance to it is free!