All of them will perform in the final of the competition, which will be held on February 3, 2013. Many of them will become world stars in a few years.

I played drums for seven years. Music in general is a big part of my life, be it listening to music, playing it, or watching other musicians play the drums. 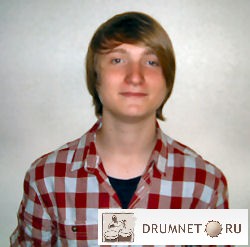 Many drummers influence me. Everything from the technical and symmetrical game of Mike Mangini0(Mike Mangini), Aaron Spears chops, Chad Smith grooves, down to Roger's easy and groove parts Taylor (Roger Taylor).

I am also influenced by the enthusiasm of my music teacher, Mr Craig Smith, who provided me with a lot of opportunities, the first drums teacher, Mike Evans, is a huge influence, as well as my current drum teacher is Jamie McGrory.

Now I play in different bands at school, I play in the church in my area.
The Young Drummer of the Year competition is a fantastic opportunity, just being here gives a lot and opens up new possibilities.