SABIAN is celebrating its 30th anniversary, if you look at the list of drummers, percussionists of this company, it takes more than one page.
One of them is Alex Acuna, he started his incredible career at the age of 18 playing in the great Cuban team Perez Prado in 1964. percussionist Alex Acuna has lived in Las Vegas since 1974, where he played with Elvis Presley and Diana Ross.
And in 1975, he joined the jazz fusion band Weather Report. 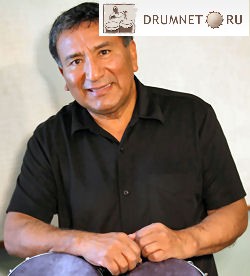 Since then, the list of groups, artists with whom he performed, recorded discs, Alex Acuña has only grown. U2, Paul McCartney, Joni Mitchell, Ella Fitzgerald, Whitney Houston, Sergio Mendes, Chick Corea, Carlos Santana, Herbie Hancock and Tito Puente are some of the most famous musicians in the world who have played with a talented drummer.

The president of Sabian is proud and delighted that such a great drummer uses Sabian cymbals.