All of them will perform in the final of the competition, which will be held on February 3, 2013. Many of them will become world stars in a few years. 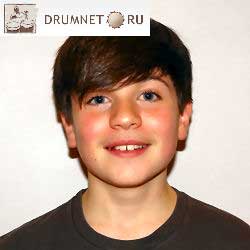 I live in Glasgow and have been playing drums for four years now. At first I was inspired by John Bonham, I even wrote essays about him at school. Now my main idol is Mike Portnoy.

My drums teacher is Jamie McGrory, I have been learning to play drums from him for 2 years now.
I play in the Wee Band and we have already won in 2011 the award in the category of the best young rock band. We constantly perform all over the country, in clubs, restaurants and hotels and even in shopping centers.

I recently won the Roland Drumming Competition and was awarded a Roland Electronic Drum Kit.
I am very pleased to be on the list of the best young drummers of 2013!