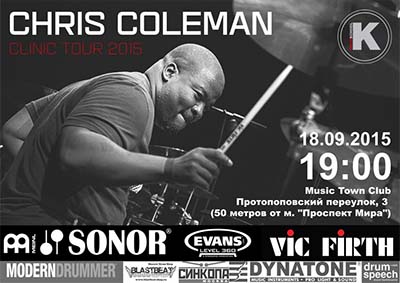 Christopher R. Coleman began playing drums at the age of two, sitting on his uncle's ruts at church. He traveled with his father and uncles who played gospel music. In his youth, he did a lot of drumming to improve his skills. While in high school, he won numerous awards as a musician, including 1st place for best instrumentalist, which he won three years in a row.

At the age of 14, he won the Music Appreciation Awards in his city, and began touring around the country with several gospel groups such as Marvin Winans, Edwin Hawkins and Vanessa Bell Armstrong and five other musical groups, including jazz.

In 1999 Chris graduated from Drummer's Collective. He was offered to continue his studies at the Berklee School of Music, Manhattan School of Music, and received a recommendation from Ed Soph at North Texas State. Instead, he decided to return to his hometown of Saginaw, Michigan to move to Cleveland and enroll at the Christian Music Academy.

On December 8, 2001, Chris won 1st place in the National Drum Competition, which was attended by over 30,000 drummers. He moved to Atlanta to study bass and gladly accepted the offer to teach drums. Plus, Chris had a pretty busy touring schedule.
In 2005 and 2006 Chris also participated in the Drummers 4 Jesus Festival. Modern Drummer wrote about him in September 2005 and June 2006.

2007 marked an unprecedented increase in activity for Chris - he continuously tours with Chaka Kahn and Rachelle Ferrell.
Since 2010, Chris has been performing at the Modern Drummer Festival and PASIC with great success.
Today, in addition to touring, Chris travels around the world and holds the so-called. "clinics" (master classes) and Drum camps (drum camps).
Location:Moscow
Start: September 18 at 19:00
End: September 18 at 22:00