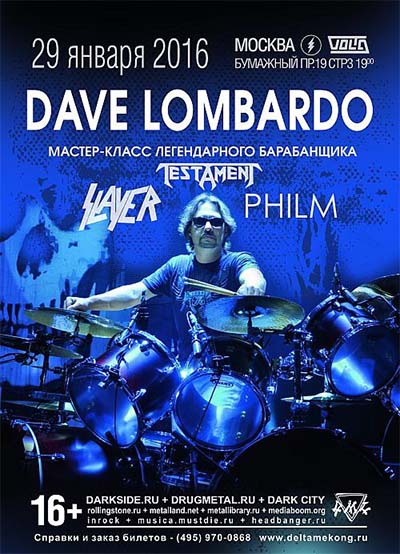 Exclusive performance by a unique drummer! The main member of the compositions of such groups as SLAYER, TESTAMENT, PHILM, GRIP INC., FANTOMAS. Let's not talk about session projects, of course - we won't count them... Here are just some facts worth paying attention to: - the musician's career spans over 32 years - Dave has participated in recording 30 albums of different genres with various bands such as Slayer, Grip Inc., Fantomas and Testament etc - Lombardo is known as an influential drummer with an aggressive playing style. The application he found for drums is often described as innovative. - Lombardo has been called the "Godfather of the Double Bass Kick" by Drummer World magazine. Many contemporary metal drummers cite Dave as their biggest influence. - British magazine Classic Rock ranked Lombardo #6 on their list of the best rock drummers of all time.
Location: Moscow, Volta