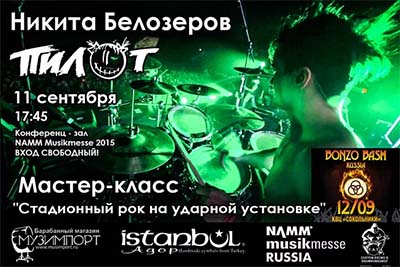 Bright, energetic and positive drummer from the PILOT band! Nikita has a powerful, fatal presentation and extensive experience of performing at the largest concert venues of the country's festivals - Invasion, Dobrofest, Neighbor World, Ostrov, and many others.

As part of the PILOT group, Nikita has been playing since 2013. During this time, he managed to travel with tours not only throughout Russia, but also neighboring countries!

At the master class you will be able to hear PILOT's rhythm section: Nikita will perform several compositions together with PILOT bass player Sergey Vyrvich!

Nikita will also talk about the specifics of a drummer's work at large concert venues. Topics such as: selection of percussion instruments, warm-up and preparation for performance, sound production, artistry and much more will be covered.

Nikita is also an endorser of the following companies: