Sabian announces the launch of the remastered HH series! 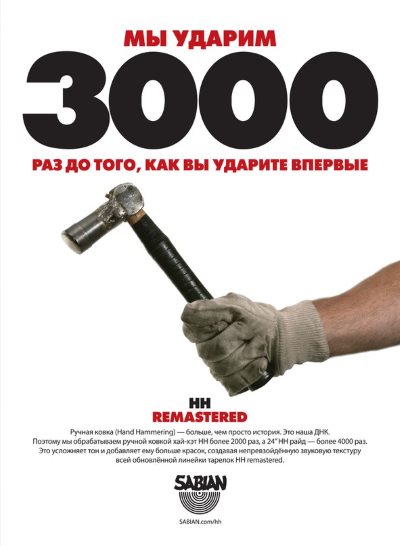 With excitement and excitement, SABIAN announces the launch of a fully remastered HH cymbal series!
Like a reworked classic album, a lot of the old sound is taken.
HH Remastered has added new colors to the tone of each cymbal, providing an unrivaled sonic texture for the entire series.

SABIAN have strengthened the manual hammering of HH series cymbal profiles.
Depending on the size, each cymbal can be hit up to 3,000 times - more in some cases - before the drummer hits it for the first time.
Is it hard to believe? Just ask Mark Love, master of sound at Sabian.

"Traditional Turkish handicraft is more than just our story."
Explains SABIAN Sound Specialist Mark Love "It's our DNA.
We have used traditional methods of hand hammering cymbals from day one,
So, as far as SABIAN is concerned, it's not a whim. This, then, is our essence."

For drummers, this increased focus on handcrafting means it has taken on a more refined and more musical sound,
Hi-hats will give a faster response and a warmer tone. As a bonus, some key new models of the series have been added to the HH remastered line.
HH - O-Zone Crash and X-Celerator hi-hats. They've never sounded better than they do now in the new HH Remastered!

"HH Remastered" cymbals are now available in all the best drum shops around the world.