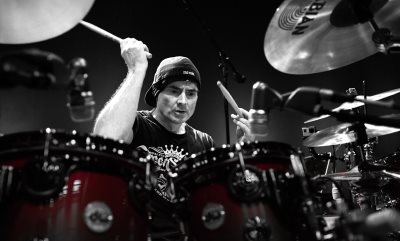 Virgil Donati Band is a project of Virgil Donati, a living legend of the drum art. The concert on October 23 will take place as part of the tour in support of his newly released album "In This Life", which, according to music critics, is "one of the best works of recent years in the entire space of progressive rock."
And now - more about the musicians of the Virgil Donati Band, including (attention!) two Russians.
From the very beginning of his career, the leader of the project, Virgil Donati, was considered an example of a non-standard approach to music, the unique sound of drums, free possession of rhythm and time. He took the art of drumming to a whole new level, demonstrating what no one has ever done - for example, doublestrokes on two bass drums at breathtaking tempos. The maestro collaborated with such top artists as Steve Vai, Tribal Tech, Tina Arena, Steve Walsh, and in his own group Planet X significantly pushed the boundaries of the game and set new standards for musicians around the world. In the past ten years, Virgil has mainly honed his technique, but with the release of the album "In This Life", he has also shown himself to be a brilliant composer-orchestrator. Despite all this, he "didn't catch a star", saying about himself: "After all the years of drumming, I still feel like I barely scratched the surface of the instrument!".

The second official member of the Virgil Donati Band is Brazilian guitarist Andre Nieri. Andre's playing style is characterized by the combination of classical Brazilian finger technique with standard electric guitar, as well as an incredible combination of virtuosity, internal timing, rhythm, phrasing and soul. His approach to the instrument is extremely unexpected, unpredictable, devoid of any cliches and artificiality. Among the regalia Andre - a victory at the famous London guitar competition "Guitar Idol-2014".
The organizer (yes, that's right: "organizer"!) will be responsible for the guitar bass part at the October concert! Anton Davidyants is a top bass player in Russia, a member of the country's best jazz and fusion bands. Anton is a musician with inexhaustible creative power and imagination, the highest level of technique and rare stage charm. He played in almost all the significant teams in Moscow - with Igor Butman, Nikolai Noskov, Elka, Anita Tsoi, Batyrkhan Shukenov, Mariam Merabova, Zventa Sventana, Masha and the Bears, Moral Code ... the list is easy to continue. Collaborated with such world stars as Eric Marienthal, Saskia Laroo, Gregory Porter, Damien Schmitt, Ada Dyer, Ty Stephens and others. The pride of the Russian scene, a favorite of the Kozlov Club audience.
Another highlight of the project will be another young star of our instrumental music - pianist and composer Nikolai Sidorenko, winner of the prestigious Montreux Jazz Solo Piano Competition-2010. Last year, the ArtBeat Music Publishing House released the CD-album Troika by the Nikolay Sidorenko Trio, a deluxe edition with wonderful music. But, with all due respect to her, it is better to listen to Nikolai live: he is one of those who carefully harnesses, but after that it takes your breath away!
This is enough to make the only correct conclusion: don't miss this event!
The cost of the entrance ticket is 1500 rubles. in presale, 1700 rub. on the Internet from concert agencies and 2000 rubles. on the day of the concert.