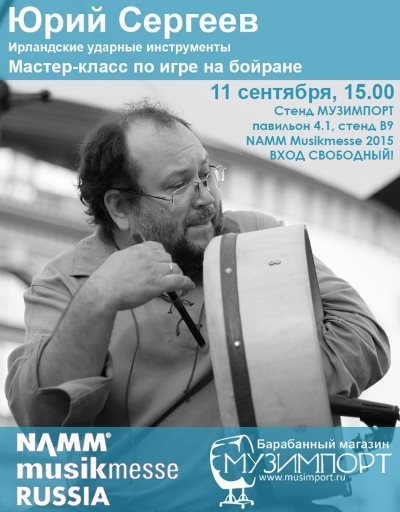 Master class on how to play the boyran from YURI SERGEEV!
September 11 at 15.00, MUZIMPORT booth at NAMM Musikmesse Russia 2015 (pavilion 4.1, booth B9)

Yuri has been playing the boyran and has been manufacturing these instruments for over 15 years, his boyrans are played in various countries - from Scotland to Japan.

Boyran is an Irish "tambourine" used, as a rule, for the rhythmic accompaniment of traditional Irish music, and also occasionally for solo playing.

At the master class, Yuri will demonstrate the sound of the boyran by performing several compositions, as well as talk about the history, device and features of this instrument.