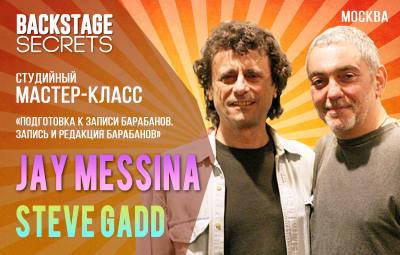 
5-hour studio session in the best studio in Moscow - Vintage Recording Studio with Jay Messina and Steve Gadd, as part of the 3rd year of the international educational project Backstage Secrets. During this workshop, you will learn everything about preparing for recording and recording drums for different styles of music in the studio, using a different number of microphones. Drum editing, compression, equalization and other drum techniques during the mix. Small groups of up to 20 people will allow all students to be directly involved in all the processes of setting up, recording and editing the recorded material “side by side” with the legendary producer and musician.

Vintage Recording Studio
Russia, Moscow
People's Militia street 39 building 2
The decision to cancel was made jointly with our residents Jay Messina and Steve Gadd, due to the difficult terrorist situation around the world, and recommendations from almost all countries to avoid large public events and refrain from flying to countries where the threat of terrorist attacks remains high. Today, after the announcement of the results of the investigation into the crash of the Airbus 321, and confirmation that the cause was a terrorist attack, we made this decision. Steve Gadd and Jay Messina will definitely come to Russia with master classes and a concert, tentatively in the spring of 2016.