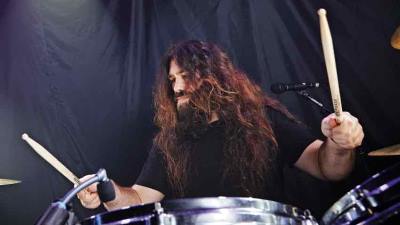 Most drummers dream of being in a successful band and touring the world. Sounds like a fairy tale, but beware of renting a drum kit. At least until you become a superstar who can afford to haul equipment around the world. You will have to acquire one set on each continent, or rent it after landing.

This is exactly the situation that Jamie Perkins, the drummer of The Pretty Reckless, is in. The band is on a streak right now, thanks to their hit singles and endless tour schedule. During their last visit to Europe, the guys opened the Fall Out Boy concerts, thanks to which Jamie got access to quality equipment. But that wasn't always the case, Perkins explains backstage, shortly before the Manchester show.

“I'm incredibly lucky on this tour, because I got a drum set from Pearl Reference, and it's great. What equipment you get depends on various factors such as location and availability of tools. Most people have their own stories about this. Many of our stories are connected with the first visit to Brazil. We got to the venue, the equipment was already there, but it wasn't set up. I said, "Hey, look folks, this setup won't work today." I went straight to the tour manager and told him that before the end of the tour in Brazil I needed other instruments, but it was too late to change the equipment that was provided for that night, so I had to struggle with it. Playing in such conditions is the fate of a professional, but I was not happy. Not happy at all. The setup was falling apart while I was playing. I'm not a demanding person, but I realized that I need supports that would hold everything in place while I play - this is an important thing. In times like these, everything is resolved thanks to the fans. We have some really crazy fans, especially in Brazil, and that night they helped me get through this situation.

This story taught me something - you need to take plates with you. It might be…useful, shall we say. With your equipment, which you know and feel, you feel more confident. The cymbals are the most compact part of the whole drum set, so I can take them with me wherever we play. This is a very individual and specific thing. I like the versatility of my cymbals, which I wouldn't get from rented equipment. Glad to know that wherever I go, my cymbals will always sound the way I like it.”

The Pretty Reckless are an up-and-coming band, and this allows them to play solo stadium shows as well as guest appearances on the Fall Out Boy tour. A step forward that throws up new circumstances for the musicians. You probably think that when playing on large venues, you need to make sure that the visual presence is felt from the farthest rows and all the way to the stage, but, as Jamie explains, it is quite the opposite.

“I need to slow down when we play big venues. Many tricks that work in smaller rooms don't work very well when you need to fill a larger space with sound. I know you think your instincts tell you to come out brighter, to hit harder. But if you do this and hear that the sound is simply lost, it's time to slow down. You get a surge of adrenaline when you perform in the stadium, and instincts tell you to add strength, but you should remember about the work that needs to be done. Your task is to unify the sound of the band, and this sometimes means that you need to keep everything in strict order. I'm still learning this balance, but I know full well that my main goal is to support Taylor and highlight what she does. If that means drumming non-stop, I'll do it, but I guess my job is to stay under the radar. It's often said that drums are like the engine room of a band, and it's true. There is a certain image of a drummer - a caveman who beats on things. But this image has developed among those people who, in principle, do not understand what the drummer does in the group, do not understand what role he plays and how significant this very role is.

GETTING THE RIGHT STYLE

An integral part of drumming in a band is knowing the music the band is playing, its audience, and making sure both work together perfectly. You can't add Mike Mangini to Status Quo, just like you can't send John Bonham to play with Coldplay. It's all about your technique and style, which has to be appropriate - a thing that Jamie is fully aware of.

“I can clearly see my role as a pillar that holds the bottom up to allow Taylor and the rest of the guys in the group to do what they do at the highest level. The band inspires me to do more, but I just want to do things that I'm sure won't harm the overall sound and the vibe we have. On the road, I have the advantage of minding my own business, they trust me. In the studio, there is a certain sequence of actions. Taylor and Ben write songs together and usually have some particular idea about what they want for each song. So it is necessary to choose the sound that they think will work. My job is to work on interpreting those ideas and what the producer wants to fit the overall sound. Sometimes they already have an idea for a sound, which we discuss together and then get to work. In other cases, they want me to try different options myself and from among them they will choose the direction that we will follow and which we will develop to the final point. Kato, our producer, is the best at interpreting their ideas. We all sit down and work hard on the material, and when they hear what they want, we move on. If I try something of my own and they don’t like it, I’ll ask what exactly they don’t like. This will give me more ideas on what to do next. All this is the result of working with ideas, understanding what works and what does not - you just need to be patient. There are times when I'm working on a drum part and I really like it and they don't, so you have to try something else, but I've learned to trust their instincts. I'm here to support the songs and the band and not try to promote my ideas for any reason. Everyone has an end result in their minds – being too persistent won’t help.”

Another extremely important aspect of drumming in a touring band is the endless journey, which can play tricks on your body. You spend days driving around on buses, sleeping in endless weird beds in weird rooms, and having to play like crazy five or six nights a week for the duration of the tour. Jamie was passionate about explaining the importance of physical health to prolonging a musician's career and his belief that your playing technique is the best way to withstand the damage that can be sustained while performing.

“Traveling is hard,” Jamie says, nodding affirmatively. “However, my two favorite activities are traveling and playing drums, so I'm definitely in the right place now. I'm lucky, because even when I'm tired or sick, or the day turned out to be hard, as soon as I get on stage and start playing, it all goes somewhere and I enjoy the show. The moment you leave the stage is when everything falls apart. Until next night. I had some back problems, but I sorted them out thanks to the warm-up before the show. People underestimate the importance of warming up before the game and the moment when everything ends and, conversely, you need to move away from the game. It is very important to keep the muscles and the whole body in good shape. Position is also very important - if you are not balanced enough when you sit at the installation, it will ruin your whole game. If the pedals aren't at the level you're used to, then you hit the drums and the cymbals don't sound right because of your position. All this immediately leads to pain and tension. You need to save movement during the game, without this you will not enjoy the process itself, and later some physical problems may begin.

“Another important aspect of the game is the ability to hold the sticks correctly from the very beginning. If you don't learn how to properly hold your chopsticks, you may end up with thumb problems, lower back problems, pain and tension in your arms, and a bunch of other things. It will be bad, and we sometimes learn about the damage received when it is already too late. If you want to have a long-term career as a drummer, you need to sort out these vital things before moving on to anything else. If you're a drummer like I am, that's especially important if you're going to be doing it for a long time. And I'm definitely going!"