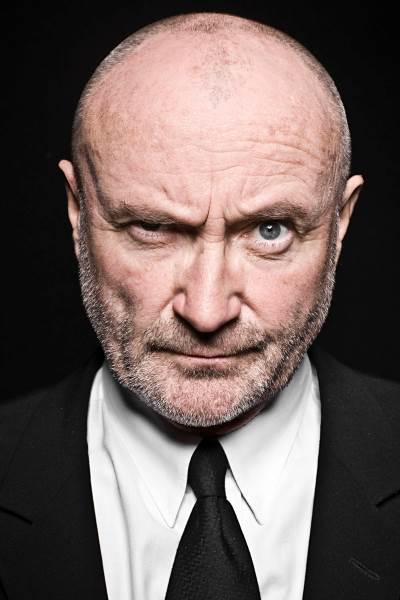 Phil Collins is the drummer and vocalist for the rock band Genesis, who has had an impressive solo career selling over 150 million albums. In addition, the composer, actor, producer, leader of the boy band. Among his awards - 7 "Grammy" and "Oscar" for the best song for the cartoon - "Tarzan".

At the age of five, his parents gave Phil a toy drum kit, and this was the start of his dizzying musical career. His first musical experience was the beat of the rhythm to the musical accompaniment of television and radio programs. Playing the drums becomes Phil's main hobby. As a teenager, he was also interested in acting, but the craving for music overcame, and in 1969 he received his first contract as a drummer for the Flaming Youth band. The album released by this team was an average success, and after a year of touring and strife, the band broke up[1].. And then, in 1970, one of the most significant moments in Phil's life came when he responded to an ad in the music magazine "Melody Maker" , which read: "The ensemble is looking for a drummer with a good sense of acoustics." The ensemble turned out to be Genesis, a group organized by graduates of a private school. Phil was immediately accepted into the group, easily beating all the other applicants at the audition. In addition to playing drums, Phil takes part in the recording of compositions and as a backing vocalist. Phil Collins' full-fledged vocal debut in the Genesis group was the composition "For Absent Friends" from the 1971 album Nursery Cryme. After founder Peter Gabriel left the band in 1975, the question arose of a new vocalist. The band listened to more than four hundred applicants, but in the end the group decided to give the microphone to their drummer, Phil Collins. This moment became one of the most significant not only for Phil, but also for the band itself. Over the next twenty years, the group became one of the most popular in the world. And a considerable merit of Phil himself in this is not only the vocalist and drummer of the group, but also the author of music and lyrics for many of its songs.

In parallel with Genesis, Phil worked with the jazz instrumental project Brand X for many years. In the early 1980s, Phil decided to release solo albums. Few of the vocalists of well-known groups who have begun a solo career manage to surpass the success achieved in the group. But Phil did it. The circulation of his first solo album, Face Value, surpassed the circulation of the Genesis albums. During the 1980s, Phil released a number of successful albums while continuing to work with Genesis. In the early 1990s, Collins decided to leave the Genesis group, devoting himself to solo projects and filming. However, before leaving Genesis, he recorded with its members one of the best albums in the "post-Gabriel" history of the group "We Can't Dance" (1991) and participates in a big farewell tour (1993).

Phil Collins has starred in many films. One of the most famous films with his participation is "Buster" (1988), a film about a robbery of a mail train in 1963.

Collins' repertoire is not limited to soulful melodic love songs. In his songs (both for his own repertoire and for Genesis) Phil raises important social and moral themes: military conflicts, difficult relationships between parents and children, the life of the homeless and other acute problems. Phil Collins is currently suffering from a debilitating hearing loss and has almost ceased live performances as a result.

On March 7, 2011, Phil Collins announced his retirement from music. “I have decided to end my career because I want to be a father to my two young sons full time and on a daily basis,” he said on his official website. In the same message, he denied the opinions expressed by various world media about the reasons that prompted him to end his musical career:

Before marrying Swiss model Orianna in 1999, Phil had been married twice. His first wife was Andrea Bertorelli (wedding in 1975), but she could not stand the frequent tours and Phil's busy career. They had two children, daughter Joel (adopted) and son Simon. The second marriage to Jill Tevelman (wedding in 1985) also broke up. Phil has a daughter, Lily, with Jill. Orianna gave birth to Phil's son Nicholas in 2001. Then, on December 1, 2004, in Geneva, Phil Collins and his wife Orianna had a boy (weight 3210 g), who was named Matthew Thomas Clemens (Mathew Thomas Clemence). Marriage with Orianna Zevey, like the previous two, also broke up in 2008 with the payment of one of the largest settlements in the history of divorce cases - F. Collins paid Orianna 25 million pounds, which amounted to about 50 million dollars.

Phil Collins is one of three musicians in history (along with Paul McCartney and Michael Jackson) whose albums have sold over one hundred million copies worldwide - both as a solo artist and (separately) as a member of a musical group.