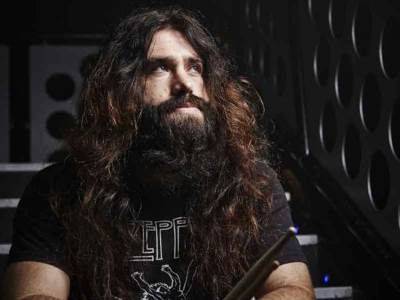 Jamie Perkins plays drums for The Pretty Reckless. At the group's concerts, he performs more than 10 minutes of solo. "I play the solo on F**ked Up World," explains Jamie. "When we were rehearsing this song, I was doing a drum break at one place and the rest of the band said, 'Hey, you should do a drum solo here.' At first I refused. I think drum solos can be both good luck and bad luck. I think that you can lose a large audience if you do something right. In the summer we played festivals and in my spare time I composed a solo. We're playing F**ked Up World for an encore and I didn't really want to play a solo on that song. I figured I would watch people go home. When I was working on it, I wanted to make it interesting. Instead of showing my skills, I wanted to do something interesting for the crowd. In short, I have never seen people leave."

Jamie's love for music from an early age taught him to analyze the songs he heard. He developed his ears and eyes.

"Certain songs captured my imagination and I remember staying up without watching a live video of her. This led him naturally enough to take drum lessons at school, and Jamie persisted long enough to persuade his parents to buy him his first set. .

"There were so many drummers with me that the music teacher tried to convince me to try another instrument," he says. "But I was pretty stubborn, and in a few months I outperformed the other students." As for direction, Jamie was only interested in rock.

"That doesn't mean I didn't play other genres of music, but rock was my first love and still is," he says. "I've listened to a lot of guys like Lars Ulrich and Stewart Copeland, Danny Carey from Tool and Matt Cameron from Soundgarden. I feel like I can take something from most of the other drummers. I started looking into other genres. James Brown obviously Bonham and Moon have added something to my drumming style, I always go to certain drummers to learn certain aspects of the game."

Having had good practice in many different bands, Jamie Perkins has caught his first real fortune which will plant the seeds of his current crop. He began working with guitarist/songwriter Ben Phillips in the rock band Famous.

"I was in a band with bassist Mark Damon and he left to work as Ben. They weren't getting along with their drummer and I got a call from Ben."

This group would later form the basis of The Pretty Reckless, but a clash of personalities initially threatened to derail the project. "I hesitated," admits Jamie, "because I didn't know what to think about Ben. Ben was very outspoken, and very critical. I was used to being one of the leaders of the group, and here Ben was the leader. It was the first time I had to listen to someone else, the first time I had to step away from the main role.But in the end everything worked out.The worst thing was to play material that they had already recorded, but as soon as we started working on a new music, I think our understanding has improved a lot."

Famous released one album in 2005 in the vein of Soundgarden, but fate gave Jamie a chance in the form of Taylor Momsen, who had written several rock songs and was looking for a band.

"She just joined our band and became the vocalist," laughs Perkins.

Taylor Momsen made a name for herself as a child, starring in The Grinch Stole Christmas and later landing a big role in the teen television drama Gossip Girl. She was also a model, but she gave up everything to focus on her main love - rock music, after meeting Famous producer Kato Khandwala. It was only a matter of time before meeting Ben Phillips, and they seem to hit it off immediately. Jamie recalls: "Taylor heard the Famous album that Kato and I did and said, 'Well, that's about how I want to sound. Why don't these guys just be my band? And we became. This is a very fortunate turn of events."

"It's all instinctive for us," says Jamie of how he decides when and what to play. "It helped us that we were a band for several years and toured a lot. We know what to expect from each other, and the main rule is never to interfere or distract the listener from the vocals. If I can play something close to the vocal line and don't get in the way, then that's what I do. That's the golden rule. When I'm in the studio, a lot of the guitar lines aren't worked out yet. I record the drums, sketching out the overall feel of the song, and Ben can come up with his parts later. Then, in gigs, I I can experiment a little, but the basic pattern of the song should not change, obviously there are places in the songs where we stick to the arrangement, but live we try to spread our wings a little, but we are a rock band and I want to keep the body. , and I try to be a unifying beginning, instead of showing the marvels of technology. I try to balance the rest of the instruments in the group."